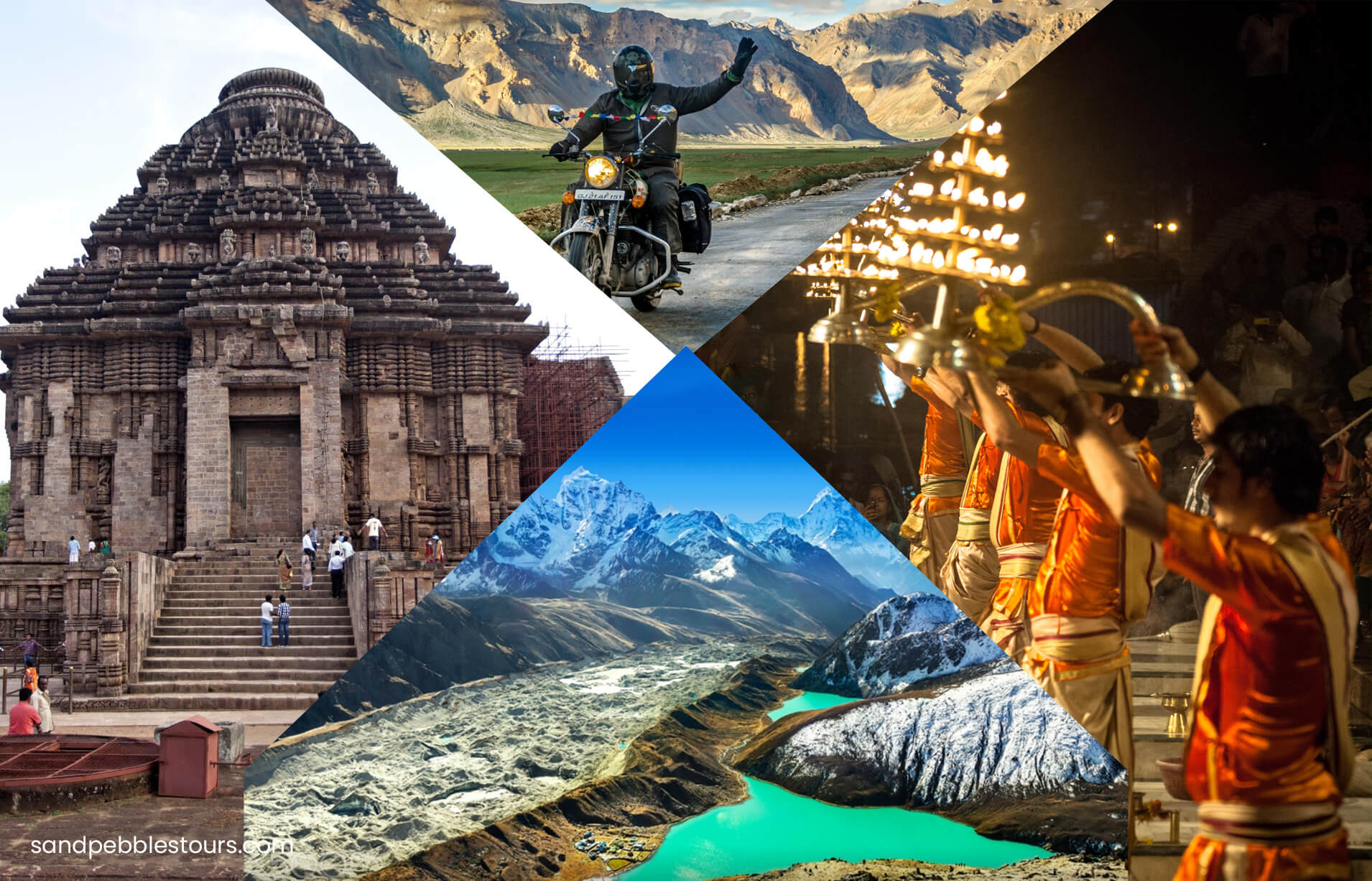 India reflects an aura of positive vibes. A country where you can experience fogs in the plains, warm sunshine near beaches, and mysterious mists in the lush environs. Explore this mystical land which beams with glory. Live like there’s no tomorrow. And whatever you’ll explore today will last a lifetime with you. Here are 8 Locations In India That Has To Be In Your India Tour.

With thousands of beautiful lakes, the Great Himalayas are an epitome of beauty. Himalayan terrain of Arunachal Pradesh and Sikkim host some of the best-frozen lake of India, Frozen lake at Tawang, Gurudongmar Lake of Sikkim and world famous Dal Lake in Srinagar. These frozen water bodies are one of the beauties of the Himalayas.

Unarguably, Goa had to be in the list. Young & energetic, Goa is one of the best holiday destinations in India that makes your trip worthwhile. Famous white sand beaches, carefree culture and multi-flavoured delicacies are what defines Goa. A former Portuguese colony, the legacy of the colonial era can be seen everywhere from Gothic Churches to monuments and other relics.

3. Visit The City Of Immortality – Varanasi

Being a witness to the constant circle of life, it is an experience that helps you in all phases of life. With beliefs of the pre-historic era, peacefully co-existing with the modernity of 21st century, a kind of mystical ambience forever envelopes the place. Its unique spiritual effect comes to fore especially during the winters when a cool with a divine-like fog blankets the city in its embrace, giving it a heavenly consciousness.

To all the nature lovers out there. Kerala is the gem of South India. With a profusion of rustic beauty and an overwhelming scenic appeal. Explore expanses of tea plantations along with aromatic, crisp and cool air, misty surroundings, waterfalls and other exotic flora and fauna. Kerala has everything for everyone. Hill stations, beaches, backwaters, wildlife sanctuaries, waterfalls, tea plantations, temples and much more.

The tall deodar trees, the cold weather, the Tibetan monastery, snow-clad mountains & experience of a lifetime, Manali will give you memories to cherish! Manali offers one of the best snow tours of the country and hosts some the most adventurous winter sports.

You have to be there to believe it. The land of Odisha is filled with temples. The capital city, Bhubaneswar is called the “Temple City”. Bhubaneswar, along with Puri & Konark is home to some of the most famous Indian Temples, such as Lingaraj Temple, Konark Sun Temple, Mukteshwar Temple, Duladeo Temple & Puri Jagannath Temple.

The Great Rann Of Kutch, India’s largest salt desert, features otherworldly landscapes. Famous for the “Rann Utsav” operated by the government in the winter season, starting from November till February. You’ll be amazed by the fact, how beautiful nothingness can be.

Travelling to Ladakh by Road is perhaps one of the most thrilling road adventures in India or for that matter anywhere in the world. You can roam around Leh in the main market area, Changspa filled with German cafes, guest houses etc. You can also visit monasteries, Shanti Stupa, Khardungla Pass, Nubra Valley, Pangong Lake. You’ll explore spectacular sights of barren mountains in Greater Himalaya and Zanskar range, sweeping valleys and stunning panoramas.